The Indiegogo After Dark collection has now raised over $1.6 million for 15 campaigns and over 18,300 backers. This includes both In-Demand and crowdfunding now products. But the story about Indiegogo and Sex Toys goes back several years. Probably the best-known example is interactive VR sex toy the Autoblow device and its successors: the world’s most realistic robotic oral sex simulator for men.

Autoblow was started by Brian Sloan. He went to law school for a career but during his personal odyssey, he hit an interesting fork in the road. He realized that being a lawyer at a law firm was not so much fun. So logically he became the “entrepreneur of the autoerotic,” as one publication described his transformation. Since then he has raised hundreds of thousands of dollars online and countless media mentions that help promote his unique device.

Rewards-based crowdfunding has become the vehicle of choice for Autoblow and many other products along the same line of business. Indiegogo, in its economic wisdom, has now formally recognized the phenomena with their After Dark subcategory. The global sex toy industry has grown into a $15 billion business. Technology and improvements in shipping have helped to pave the way. No need to sheepishly purchase a product in a local fetish store as devices are delivered discreetly to your doorstep within days. According to StatisticBrain, Indiegogo has been segmenting their platform for quite some time now. The advent of In-Demand e-commerce has melded Indiegogo into part crowdfunding, part online shopping mall. It will be interesting to see if After Dark companies join in on the forthcoming equity crowdfunding offers. 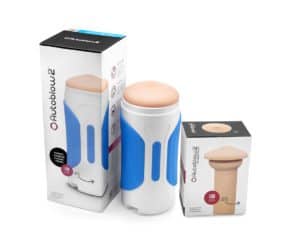 The Top Five Indiegogo After Dark Sex Products are Below (subject to change).